Air Travel in Turkey Continues to Rise in Popularity

The last twenty years have seen many changes in Turkish society and travel businesses were one of the sectors massively affected when the government embarked on a campaign to modernise methods and infrastructure.

Efforts are definitely paying off, as the latest travel stats revealed by the General Directorate of State Airports Authority of Turkey said that during the first eight months of 2017, Turkish airports saw an increase of 9.1% in passengers, year on year.

Serving 116.5 million people in 2016, the figure jumped dramatically to 127 million flyers in 2017, an achievement that proves the growing rise in popularity of air travel in Turkey.

For many decades, bus travel was the preferred method of Turks for getting from A to B, but the last 20 years has seen preferences change to air travel, mainly because it cuts down the journey time by as much as 75%.

However, domestic travel is not the only contributor towards the increase in air travel passengers. Despite the tourism industry suffering over the last two years, nearly 55.5 million international business and leisure travellers, passed through Turkish airports. This is an increase of 15.9 percent year on year.

At the same time, 2.2 million tons of cargo traffic saw a 3.9% increase annually, and including overflights, a staggering 1.3 million planes contributed towards the flight industry of Turkey.

Modernization of Airports in Turkey

The astonishing results are no fluke either. In 2004, Turkey embarked on a massive project to update and modernise its travel infrastructure including motorways and airports. At the same time as dealing with increased security procedures, airport authorities stepped up to the mark with an emphasis on getting passengers quickly and efficiently to their chosen destination.

Three airports contributed significantly to the rise in air travel.

Istanbul Ataturk airport that also holds the record of the fifth busiest European airport has undergone many modernisation projects over the years. Most importantly in 2014, when 75 million USD was pumped into a brand new international terminal, bringing the number of their boarding bridges from 26 to 34. The project contributed towards a 10% increase in passengers.

In 2008, and 2009, projects to modernise Istanbul Sabiha Gokcen airport (SAW) saw it rise to maximum capacity. Meanwhile, on the Mediterranean coasts, antalya_airport”>Antalya airport, a significant player in the tourism industry, opened their second international terminal in 2005, and in 2010, they modernised their domestic terminal with an investment of 99 million euros. 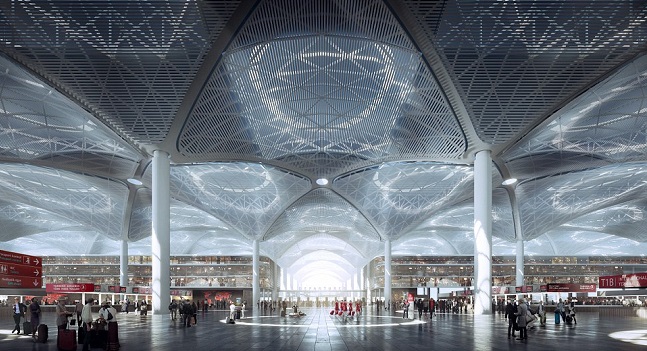 Anyone assuming that with such roaring success year on year, that air travel in Turkey has reached its peak, would be sorely mistaken because the eyes of the worldwide aviation industry are looking to 2018 when Istanbul New Airport will open for business.

The four-phase project will have eight control towers, six runways, 165 boarding bridges and connection to a rail terminal taking passengers into the heart of Turkey’s biggest city. Not only is it expected to change air travel in Turkey but will also have a substantial effect on the aviation industry across the globe.