Turkey’s news agency Anadolu has reported that by the end of 2017, 200 electric taxis will be working in Istanbul, the largest and busiest city in the country. The announcement, made by Yahya Ugur, who heads the Istanbul Chamber of Taxi Drivers (ITEO) happened at a publicity event in front of the Zorlu Center, to display the new electric public transport. 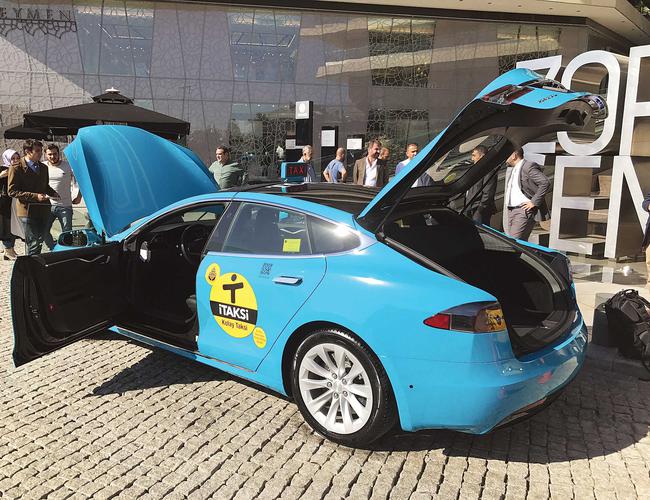 A publicity event in June promoted the new vehicles to taxi drivers with an affordable package and repayment terms and more taxis hit the roads on October the 9th. The rest will slowly be rolled out over the next three months, and all will be easily identifiable with their turquoise blue colours rather than the traditional yellow colour of Turkey’s existing taxi ranks.

Adding that the taxis will be application supported and have already installed security cameras, he said passenger’s safety, comfort and the quality of service offered would all increase naturally because of the new electric vehicles.

Stressing that the application supported system must not be compared to the UBER app, of which there is an ongoing dispute about undercutting, he emphasised the need for a new taxi system to stop pirate drivers as well as companies like Uber.

New vehicles or licenses will not automatically be given to drivers of existing taxis. They will instead decide for themselves if they want to stay with the existing yellow cars or move over for their benefit.

One such advantage of the electric taxis is that drivers will be able to enter every area of istanbul_park”>Istanbul, a disadvantage now for yellow taxis, who cannot enter some districts run by different corporations.

However, one unusual aspect is the fees for the electric taxis will cost on average 15% higher than your ordinary vehicles which is surprising because electric cars are cheaper to run and maintain. The issue could be to do with licensing or the fact that it is a new project and as it becomes mainstream, prices will level out.

Other Benefits of Electric Vehicles

Passengers concerned about the impact of vehicles that they use will be pleased to know that electric cars have many benefits that are non-existent in traditional cars. As well as being cheaper to run and maintain, they are better for the environment because they have zero exhaust emissions. Such a concept widely used in large cities could dramatically reduce the air and noise pollution because electric vehicles are also quieter.

Manufacturers are also looking at eco-friendly production by using recycled construction products. Items such as plastic bags and second home appliances can be used in the interior bodywork and décor. Electric vehicles are also safer because there is less chance of them rolling over with impact and have more durability in the case of a collision.