President of Turkey, Recep Tayyip Erdogan recently announced that by late 2017 or early 2018, they will commence with the most ambitious part of the Kanal Istanbul project, an artificial sea-level waterway, that will change the face of the city. Up until now, attention has focused on the choice of routes that will have the least impact on the environment, fresh water sources and land used for agriculture, as well as the foundations. 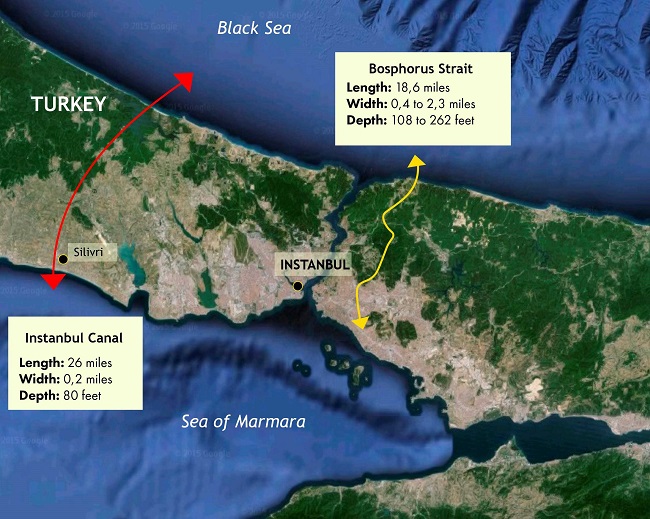 Work started on the canal in 2013, and so far, 162,000 boreholes have been drilled and foundations laid for the Kanal Istanbul project that will be 43 kilometres (26 miles) and divert tankers away from the Bosphorus which is at risk from over trafficking. The canal is just one of many mega projects taking place in Istanbul that also includes the world’s largest airport that will likewise open in 2018.

The artificial channel will run between the marmara“>Marmara and Black sea and at a width of 145 meters and depth of 25 meters and was first revealed to the public in 2011 just before general elections. By the time the 15 billion USD project is finished, Istanbul will gain a new island, a new city and six bridges will direct traffic over the channel. The estimated completion date is 2023.

The idea for Kanal Istanbul was born out of a need to end traffic in the Bosphorus straits which is at danger of over pollution and collusion between ships. About 56,000 vessels pass through the Bosphorus straits, that has for many centuries been an important trading route for the rest of the world. About 10,000 of those ships are crude oil tankers.

The History of Kanal Istanbul 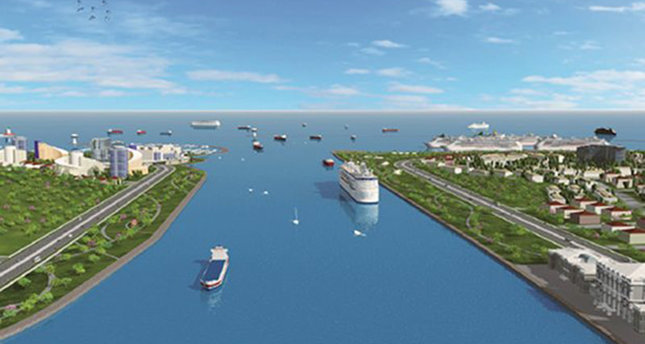 This is not the first time that such an ambitious project has been suggested. Mimar Sinan, the most famous Ottoman architect, drew up plans in the 16th century, but the project never started because of the cost and tremendous amount of work needed. Many more suggestions and ideas were put forward over the next centuries, of which none bore fruit.

In 1994, the DSP political part of Turkey bought up the idea again, but discussions never moved to action plans until 2009, when the leading AKP government revived the project and implemented an action plan. The Turkish treasury has allocated financing for the project, and the military is expected to help with its construction.

The Media and president have both called the Kanal Istanbul, the “Crazy Project,” indicating the detailed organisations, skills and planning that would be needed to complete it. The government has also said that it is a project touching on every level of society including energy, employment, transport, and education but in the meantime, real estate investors still speculate as to how the canal will change the housing market of Istanbul.

Responding to environmental concerns, the government said they are environmentalists themselves, and by directing traffic load away from the Bosphorus, they are preserving nature and flora and fauna of Istanbul. Such is their aim to clean up the Bosphorus from pollution, they envisage it as a water sports destination in the future. 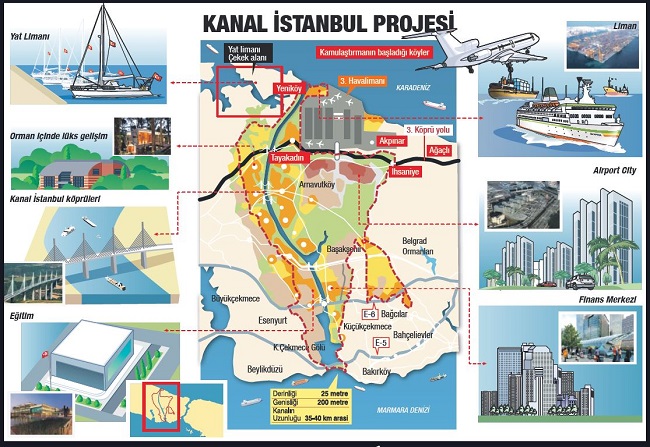