While the Turkish economy performed exceptionally well in 2017, it seems Turkey is not about to sit back and relax. Looking to boost already fruitful political, economic, and military relations between Turkey and Africa, the President of Turkey, Recep Tayyip Erdogan has just toured the vast continent on a 5-day, 4-night trip.

On this occasion, Recep Tayyip Erdogan visited Algeria, Mali, and Senegal but in the last 10 years, he has made more than 30 visits to the Africa continent, more than any Turkish counterpart in history.

Turkey sees Africa as a continent in the middle of modernisation, growth and economic reforms and they want to play a significant part in the journey, especially when it comes to mutual agreements for construction, trade and natural resources. 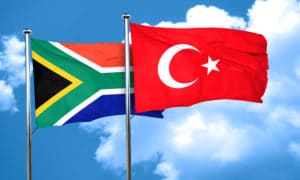 According to the Turkish Ministry of Foreign Affairs, Africa is home to 6 out of 10 of the world’s fastest-growing economies, and by 2050, its economy will be generating 29 trillion USD every year.

In 2008, the African Union declared Turkey as a strategic partner, and since then relations have gone from strength to strength.

In 2013, a new policy between Africa and Turkey took the motto of “African issues need African solutions,” an emphasis that Africa remained in the driving seat, and Recep Tayyip Erdogan confirmed this by famously saying “Africa belongs to Africans, we are not here for your gold.”

In 2014, they laid out the groundwork for a four-year plan that will finish in 2018. During the rise of relations between the two parties, Turkish embassies in Africa rose from 12 to 41, and African embassies in Turkey rose from 10 to 32. 45 African countries have also signed trade agreements with Turkey.

When Turkey enjoys any kind of global success, it is guaranteed that the country’s national carrier is somewhere in the background and indeed, Turkish Airlines feature prominently in relations between Africa and Turkey. In Feb 2018, they launched their 52nd destination in Africa and now fly from Istanbul to Freetown, Johannesburg, Cape Town and Dakar among many other destinations on the continent.

Africa is just one corner of the globe that Turkey has been courting over the last 15 years, as part of its broader 2023 vision plan. Turkey’s foreign policy says it will take part in all global affairs, play a determining role in international organisations, and through regional integration, will form economic cooperation with interested nations.

Turkey already has a thriving import and export sector with the EU and the United Kingdom in particular. It has also entered into the “One Belt One Road” project with China, which has declared 2018 to be the year of tourism in Turkey.

Relations with Qatari have been strengthened, and the country is in the middle of a real estate spotlight from Middle Eastern nationalities.

Indeed, diversification is Turkey’s key strength. This is what appeals to business and real estate investors from all over the globe, and what paved the way for relations between Turkey and Africa to blossom.