Home > News > Turkey's Foreign Trade Statistics for First Half of 2017

Turkey’s Foreign Trade Statistics for First Half of 2017

A recent report published by the national news agency of Turkey, Anadolu has revealed foreign trade statistics for the first half of 2017. Using information, and data provided by the Turkish Statistical Institution (Turk Stat), the report also compared year on year figures of June 2016 and the same month in 2017.

The most significant information to take away from the report revealed Turkey‘s exports rose by 2.3 percent ($13.17 billion) in June 2017 compared to $12.7 billion over the same period last year. This helped Turkey to close its foreign trade deficit to $6.01 billion.

Manufacturing accounted for many of June’s exports, with a 94.6 percent share and a value worth $12.5 billion. Agriculture and forestry followed with 2.8 percent, and mining and quarrying were accountable for 2 percent.

Elsewhere, the Middle East soaked up 22 percent of exports in June, a fall of 3 per cent to $2.9bn. Other trading nations taking Turkey’s exports included the United Arab Emirates ($896 million), the United States ($886 million) and the U.K ($808 million).

Meanwhile, total imports stood at $19.2 billion, a fall of 1.5 percent year-on-year from $19.5 billion in June 2016. It represented the first decline in imports in 2017. Before June, imports had increased back-to-back in April by 9.9 percent and 22 percent in May.

This meant June’s foreign trade deficit of $6.01 billion marked a 9.1 percent decrease compared to June 2016. However, it is Turkey’s third largest negative trade gap since January 2016.

From January to June 2017, Turkey’s export trade was worth $77.5 billion, an 8.2 percent rise, while its imports value increased 8.7 percent to $108.4 billion. The country’s foreign trade deficit was $30.8 billion, a 10 percent increase compared to the previous year. 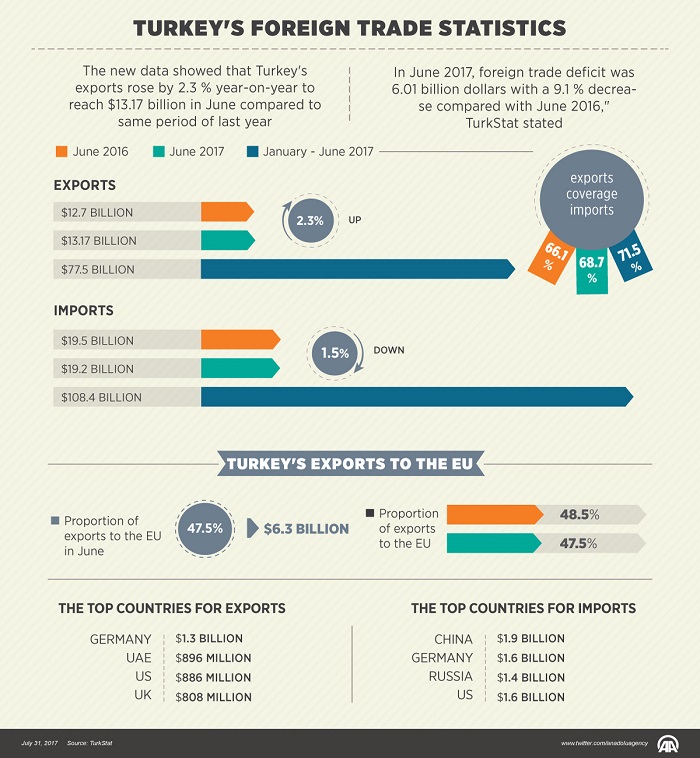 Relationships with German, Russia, and the EU

Turkey’s exports to its largest trading partner, the European Union (EU) stayed mostly static, increasing by only 0.1 percent to $6.3 billion in June compared to last year. Overall, this stood for a 47.5 share of Turkey’s export cake as against 48.5 percent in June 2016.

Two talking points from June’s stats focused on Germany, Turkey’s largest trading partner that it is embroiled in a diplomatic spat with, and Russia, with whom Turkey is continuing to warm to after a damaging split.

Exports to Germany reached $1.3 billion, a 6.3 percent rise compared to June last year, and a 3.5 percent increase to $7.2 billion in overall trade volumes for the period January to June.

However, economic experts and business leaders are keenly watching whether bilateral trade, ties and volumes will continue considering the ongoing rows between the two NATO countries. Bilateral trade volume between Turkey and Germany stood at $35.48bn last year.

With Russia, Turkey shipped $238 million worth of goods, a staggering 101.5% rise from June 2016. Overall exports, year-on-year, increased by 53 percent to $1.13bn across January-June. The positive trade figures show that intense diplomatic efforts to mend fences between the two are continuing to bear fruit.

One victim of the dispute between Russia and Turkey was, and still is, is the ban on Turkish tomatoes. Russia embargoed Turkish tomato imports when one of its jet fighters was shot down by Turkey near the Syrian border in 2015.

Ties have begun to normalise, with June’s signing of a decree by Russian Prime Minister Dmitry Medvedev lifting a ban on agricultural produce and allowing Turkish companies to become involved in various projects, such as construction and tourism.

In turn, Turkey has seen a massive uplift in the number of tourists heading from Russia for vacations, notably to their earlier haunt of Antalya on the Mediterranean coast.

With April and May seeing the overall foreign trade deficit widening by 16 percent and 44 percent, the Turkish government is signalling an end-of- year deficit of $60.7bn with exports raising $153bn and imports reaching $214bn. Last year, the foreign trade gap was $56bn.

Economy experts continue to watch the depth of the fallout between Germany and Turkey to see if this has a detrimental impact on business and the usage of the Turkish lira in exports increased by just over 100 percent from around $3.69 billion to around $7.46 billion making it the currency of choice compared to the US dollar and the euro.