Home > The Most Popular Coastal Holiday Resorts in Turkey

The Most Popular Coastal Holiday Resorts in Turkey

Turkey thrives as a tourist and expat destination, mainly because of the masses of coastal holiday resorts attracting beach lovers and expats seeking a life in the sun. Only a small area of the country is landlocked and the north, west and part of the south together have 5,000 miles of coastline.

Many of the popular coastal holiday resorts in Turkey sit in the Aegean and Mediterranean provinces that were the first areas to embrace mainstream tourism in the 1980s, hence have a long standing reputation in the travel industry. Hundreds of international flights from and to bodrum” data-wpil-keyword-link=”linked”>bodrum”>Bodrum, Izmir, Dalaman and Antalya airports also connect them to many countries.

When is the best time to visit?

Sitting in provinces such as Antalya, Fethiye, Marmaris and Bodrum, the best time to visit the coastal holiday resorts are between May to October, when the official tourism season starts, and major airlines resume their summer schedule.

During winter, hotels, bars and restaurants close in some of the smaller resorts, and the colder winter climate dampens the concept of beach vacations. However, some of the larger resorts have also grown into popular expat destinations, and open all year round, so anyone with interests’ other than laying on a sandy beach, will still find lots to do.

Irish holidaymakers for many years favoured Kusadasi as the best destination to visit in Turkey, yet recently, the growing expat community of various nationalities has diluted its reputation to become more of an all-rounder. The many cruise ships docking in yearly, to take passengers to the nearby ancient ruins of Ephesus, also enhances its international status. There are many small places to stay in Kusadasi, but Ladies Beach area is highly popular. The beachfront, backed by many bars, restaurants, shops, water sports and hotels, make it seems like a mini resort within itself. 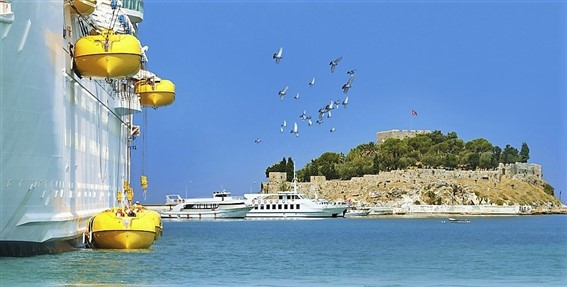 Altinkum: The Golden Sands of Turkey

Also on the Aegean coast, about an hour’s drive from Kusadasi, British holidaymakers and expats, have many years favoured Altinkum, hence its nickname of little Britain. Anyone who wants their home comforts while sunning it up in Turkey will enjoy the restaurants and bars selling English breakfast, Sunday dinners, and showing the latest in football matches.

Some people call Altinkum, by its old name of Didim, but this refers to the area and town centre, away from the beach. It’s more traditional and boasts of the famous landmark of the temple of Apollo. It is a 10-minute bus ride from Didim to the three large beaches surrounding the main stretch, hence the translated name of Altinkum, that is golden sands. (Read more about Altinkum here) 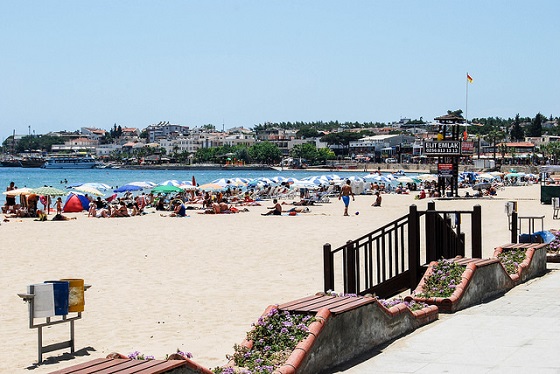 Now, this is where beach lovers will feel at home. The Bodrum peninsula consists of the main town centre and smaller coastal resorts each with a unique vibe attracting various nationalities. International yachts generally dock into the centre because of its state-of-the-art marina, while further along the coastline, if you have the cash to splash, luxury Golturkbuku is the place to hang out.

The typical beach resort of Gumbet attracts many British nationalities while Yalikavak has risen the ranks from small fishing village to popular expat destination. In recent years, the addition a luxurious marina, with the capacity to hold mega yachts has raised its international status on the sailing scene of the world.

Wealthy and famous Turks also adore, Gumusluk, a small, traditional village famous for its seaside restaurants serving fresh fish and seafood, while beachfront restaurants in Turgutreis are the ideal place to watch the fantastic Aegean sunset. (Read more about the Bodrum peninsula here)

Urban legends say the name “Marmaris” is a deviation from the areas first name meaning “hang the architect” because of a king who detested his newly built castle. Whether this is true, holidaymakers should wander the cobbled streets of the old town to visit the museum and castle.

Following it up with dinner in one of the harbourside restaurants, youngsters tend to end the night in bar street, which gives Marmaris its lively nightlife scene. Holidaymakers adore the long sandy beach in the town centre or catch a bus to nearby but smaller Icmeler that also hosts water sports.

Tourist attractions are further afield in Marmaris, leaving little to do in the city centre apart from hanging out on the beach, but if you are looking for a laid back, relaxing holiday, Marmaris will offer that. 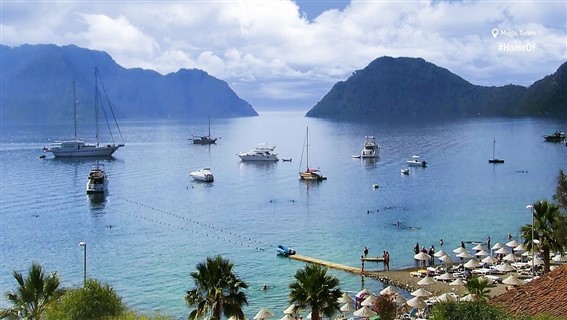 The Fethiye Region: Including Oludeniz, Hisaronu, and Ovacik

One of our favourite regions in Turkey is Fethiye because it ticks all the boxes. Flying into Dalaman airport, the region is just an hour’s drive away. Places to stay include the city centre, but we prefer the gorgeous coastal holiday resort of Oludeniz.

Home to the famous Blue Lagoon, one of the most photographed beaches in Turkey, it also has a relaxed and friendly vibe. The region has a large expat community, of which many have settled in the holiday resorts of Ovacik and Hisaronu. Otherwise, the long stretch of sand on Calis beach is a great place to watch the vibrant orange sun set  over the Mediterranean. (Read more about Fethiye here) 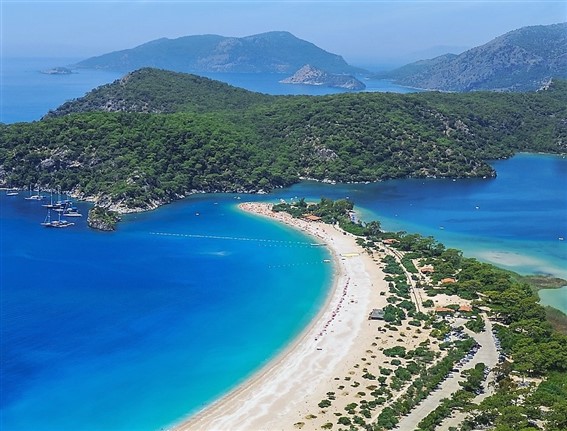 These two resorts sitting side by side are smaller than the places mentioned above, yet each keeps a unique quality, found nowhere else in Turkey. Kalkan distinguishes itself from other locations because of its upmarket status, as often seen in the luxury villas for rent.

Kas has grown because of tourism and expat popularity, yet around the harbour front and old town, whitewashed houses with wooden shutters and flowing pink bougainvillea, show slight traces of nostalgia. It is a 30-minute drive between the two, and while their beaches will never win awards, they are close to Kaputas and Patara beach, of which both are some of the best in Turkey. 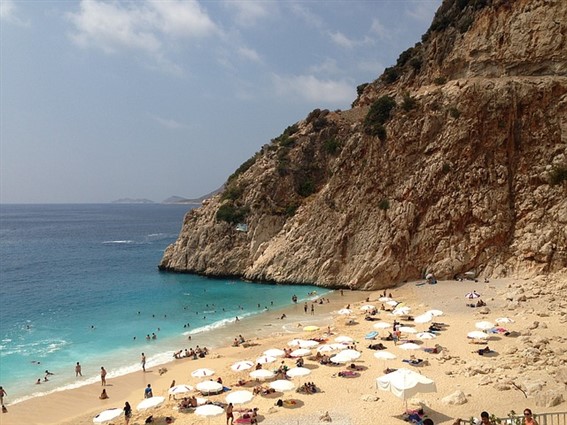 The Antalya region is the second most popular holiday destination, after Istanbul. Adored by many nationalities, especially east Europeans, holidaymakers have quite a few coastal resorts to choose from. Kemer shot to fame as an all-inclusive destination thanks to the large beachfront hotels selling rooms with food and drink included.

Meanwhile, nearby belek” data-wpil-keyword-link=”linked”>belek”>Belek headed in the opposite direction and now holds the crown as the golfing capital of Turkey. Side is a small town built around old ruins, while the city centre attracts many fans because of the Lara Beach district, with its themed, all-inclusive hotels and the old town part known as Kaleici.

Out of all the resorts, success has indeed come to alanya” data-wpil-keyword-link=”linked”>alanya”>Alanya that is now a fully-fledged city because of the impact of tourism and influx of expats. (Read more about the Antalya region here)

Further Reading: Our blog and news section has many articles with travel tips for Turkey, as well as the latest tourism, economy and business news in the country. Alternatively, stay connected by following us on Facebook, for daily and weekly updates. 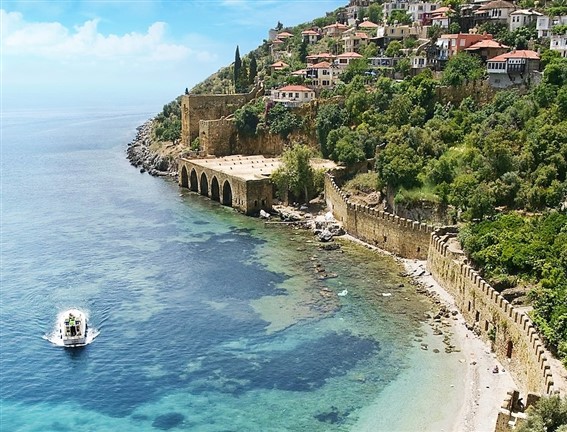