Short History of the Fethiye Region

Modern Fethiye is located on the Lycian and Carian border on the site of the ancient city of Telmessos, the ruins of which can still be seen. The city was very prominent and a centre of prophecy, pledged to Apollon, with a recorded history starting in the 5th century BC. A Lycian legend explains the source of the name Telmessos; the god Apollo falls in love with the youngest daughter of the King of Phoenicia, Agenor. He disguises himself as a small dog and thus gains the love of the shy, withdrawn daughter. After he reappears as a handsome man, they have a son, whom they name ‘Telmessos‘ (meaning the land of lights). The city became part of the Persian Empire 547 BC, along with other Lycian and Carian cities.

The oracle of Telmessos had great impact on the course of ancient history and it says that Alexander the Great, on a mission to invade Anatolia in the winter of 334–333 BC, entered Telmessos harbour with his fleet. The commander of the fleet asks permission of King of Telmessos for his musicians and slaves to enter the city. On getting the permission, the warriors with weapons hidden in the flute boxes capture the acropolis during the feasts held at night. His empire fell in 133 BC and the remains of this historical period can be found in several rock tombs overlooking the city – one of the most spectacular is the tomb of Amyntas. The tombs have been carved out into the rock faces behind the city, some with inscriptions dating back to the 4th century B.C.

By the 10th century, it came to be called Makri, after the name of the island at the entrance to the harbor and became part of the Ottoman Empire in 1424. In 1934, the city was renamed ‘Fethiye’ in honor of Fethi Bey, one of the first pilots of the Ottoman Air Force, killed on an early mission. The Fethiye Museum, which is very rich in ancient and more recent artifacts, displays and testifies to the successive chain of civilizations that existed in the area, starting with the ancient Lycians.

Now a thriving harbour town, Fethiye is one of Turkey‘s well-known tourist centres and in the last ten years has become a magnet for British citizens. Apart from its climate and natural beauty, the Britons are attracted by its less expensive lifestyle and the hospitality of the local people. The British population in Turkey is between 34,000 and 38,000. As a result of the large British population and the high numbers of Britons going there for holiday, Fethiye-Öludeniz was chosen as the best tourism centre in the world by The Times and The Guardian newspapers in 2007. Over 7,000 British citizens permanently live in Fethiye property, while approximately 600,000 British tourists visit the town every summer.

Fethiye has a Mediterranean climate consisting of very hot, long and dry summers with an average of 34°C (93°F) in the daytime, winters are cool and rainy with a daytime average of 16°C (61°F). Today the Fethiye Region encompasses many areas (as described below), each with their own atmosphere and style. Though the Region has grown considerably in the last ten years, it will never become the size of many of the European holiday destinations due to the natural limitation of the area. The Region is surrounded by a pine clad mountain range, all of this area is protected and no development is allowed which means that Fethiye can continue to improve and update its existing platform while keeping its original character and beauty.

Ovacık is a small village in the Fethiye Region adjoining the holiday resort of Hisarönü consisting mainly of small hotels, and private villas and apartments. Here you will find a number of small restaurants and bars catering for the people who prefer a quieter evening out than the hustle and bustle of Hisarönü. The village is set on a small plateau at the foot of Babadağ  Mountain and benefits from refreshing breezes and is a peaceful and relaxing spot. The views across the valley are superb, as are the sunsets and Ölüdeniz is within easy reach just ten minutes away by bus.

Hisarönü is a tourist resort which has grown from a very basic village in 1990 to the large resort with its neighbor Ovacık since then.

Hisarönü was originally intended to provide accommodation for nearby Ölüdeniz (where new building work is restricted). In response to its friendly atmosphere, Hisarönü has become a holiday resort in its own right and is popular with British holidaymakers in particular.

During the summer season the village becomes lively and bustling with shops, bars and restaurants aplenty. Monday is traditionally market day with lots of leather and textile bargains and a wonderful array of fresh fruit and vegetables. Again Hisaronu is just a short bus journey away from Ölüdeniz.

Heading from Fethiye towards the road that eventually leads to Ölüdeniz is the newest part of Fethiye developed only in recent years. Deliktaş is set in a valley just behind the main road and has now developed into a popular residential area with a few shops dotted here and there and the main bus route also now encompasses this area.

Taşyaka is further up the hill, set in an elevated position, again mainly developed recently and has the advantage of superb town and sea views. Though not a tourist destination, the area is becoming very popular with the ex-pat community due to the sizeable accommodation on offer, bus route on the doorstep and some of the most stunning views the area has to offer. A new in-door shopping centre is now planned for this area. 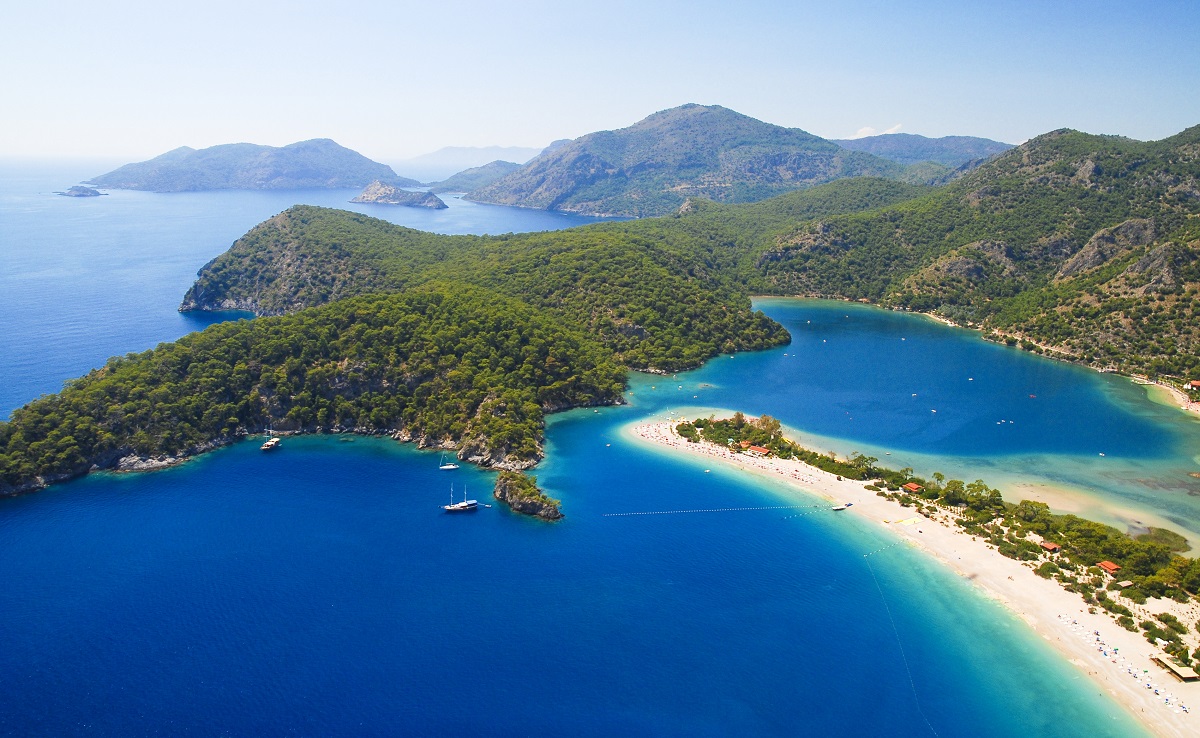 Karagözler forms part of Fethiye’s old town (Paspatur) and is the area’s most prestigious and arguably the most authentic district. Karagözleris made up of the old Karagözlerwith its beautiful marina views and second Karagözler, which developed later on with more modern properties lining up toward the old Fethiye shipyard.

This area is particularly sought after due to its perfect location relative to the main marina, old town, the fish market and Fethiye Town centre. Paspatur is a short level walk away and is the most colourful shopping and entertainment centre of Fethiye town. There are seven entrances, two of which are on the main streets.

It displays an extraordinary panorama for those camera-addicts with its restaurants, old buildings under protection, streets, bath, mosque, cafeterias on the sidewalks and bars. Paspatur means “water channel-trench”, named after the irrigation system built for the town in the past. A popular belief of Paspatur is that “those who take a drink of Paspatur, will come to Fethiye again….”. At the Paspatur Market shops are open very late, selling all kinds of goods ranging from traditional handcrafts to souvenirs.

On the fringes of Fethiye is Çalış, a lively town with a laid back atmosphere. Çalış means ‘work’ in Turkish and the town has not always been a holiday destination as Çalış Beach was Work beach where a small railway ran across the beach to the jetty with loads of Chromium, mined from inland. Those days are well in the past and the only work done nowadays is lazing on the beach! Çalış is reported to have around 300 days of sun each year and the beach is lined with a vast array of bars and restaurants on the promenade where you can watch the most stunning sunsets.

The village of Üzümlü is one of spectacular natural beauty, set in a valley surrounded by dense pine forest and rugged hillsides. Close to Üzümlü is Cadianda, an ancient Roman site and Lycian city; the ruins of the amphitheatre, stadium, baths and temple and still there to explore today. Numerous vineyards surround the village, which is renowned for the production of wine. Üzümlü has managed to retain all the natural charm and character of a traditional Turkish village and yet still has the convenience of the modern town of Fethiye just a twenty minute drive away.

Çiftlik is situated a little further from Çalış, just back from the sea front in an elevated position giving lovely views out across Fethiye Bay. This is a much quieter village, giving you a more Turkish feel and yet only a short bus ride into Fethiye.