7 Fun Things to do on the Isle of Arran

Things to Do in the Isle of Arran

Brodick Castle is probably the most popular tourist attraction on the Isle of Arran. With expansive gardens that take your breath away, an exciting collection of artefacts behind those walls stuns visitors with their historical values. Dating back roughly 150 years, Brodick castle was originally a military fortress. Also, previously a seat of the Duke of Hamilton, the National Trust now owns Brodick castle. They marvellously bring history back to life for current generations to appreciate. 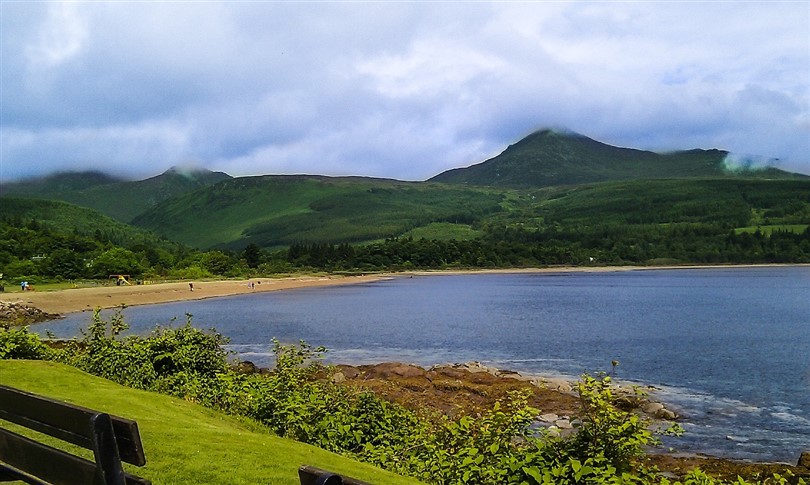 The second most popular attraction on the Isle of Arran, Goatfell, stands at 2866 feet. While getting there is an achievement, walking enthusiasts enjoy stunning views. As the tallest mountain on Arran Island, it dominates views from miles around, and naturally, the exciting flora and fauna are another good bonus. The one conundrum is that no one is sure how Goat Fell received its name.

There is nothing the Scots take more pride in than their single malt whiskey; and this is where Arran distillery takes the throne. First opening in 1995, many say the distillery process makes Arran whiskey one of the best. Visitors to the Isle of Arran join tours to learn how the process works and taste whiskey before buying souvenirs. They also opened a second distillery in Lagg, and for those who do not like whiskey, try their cream liqueur.

The 6000-year-old Machrie moor stones on the Isle of Arran fill everyone with curiosity. Stories say the moor stones were the scene for rituals in neolithic history, but this was never proved. One Machrie stone stands for 5 metres while being arranged with six other moor stones in a circle that evoke images of magic. The walk to the stone circle takes roughly 1 hour from the car park, and the entrance is free for an exciting morning out.

The Arran coastal way and trail are not to be underestimated. Stretching for 109 kilometres, even experienced walkers say it is challenging. Such is the status; the walk has received the official tourism label as one of Scotland’s greatest walks. Pre-book accommodation, and do not forget those maps. Those who do complete it expect amazing scenery that matches nowhere else in Scotland. If you reach the Blackwaterfoot route, detour slightly to head to King’ss cave for amazing views. 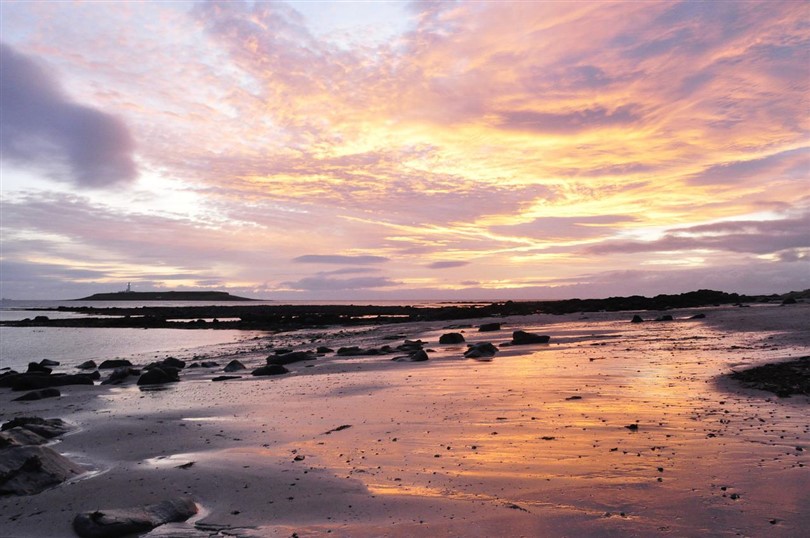 6: Courses for Golfing Fans in Arran

Golfing fans will be impressed with the courses at Arran. Lamlash, the largest village, features an 18-hole golf course with fantastic views while you are completing the challenging terrain. Another choice is the 9-hole Lochranza. For this course, golfers buy three-day or daily Lochranza passes. Head to Brodick course instead, a short walk from the ferry for quick games. There is also the nine-hole Machrie golf course, near the tennis court and Machrie centre tea rooms.

Whiting Bay: This sandy haven of Arran offers various water sports like surfing, but it also attracts those who want to walk. Small cafes nearby are great places to grab lunch, while some holidaymakers also bring picnic baskets. Also, keep an eye out for the fantastic golden eagles.

Sannox: Sitting on the northeast side of Arran island, Sannox is secluded but perfect for those who want off the beaten track. Reached by well-marked footpaths, it is the ideal beach for peace.

Kildonan: Sitting in southern Arran, this beach gives off incredible views of the Kintyre peninsula. The bonus, however, is when the local seals appear to lounge about. This area is perfect for overnight stops and for visiting Eas Mor waterfalls, the Isle of Arran’s top sight of natural beauty. 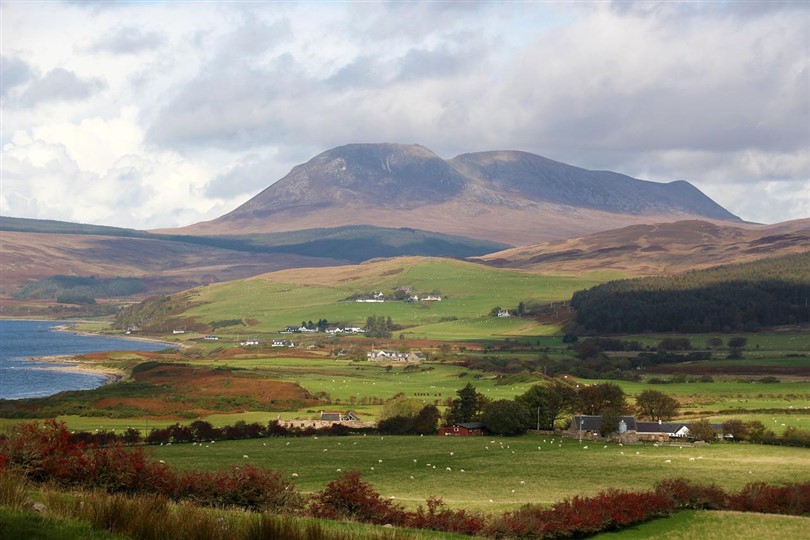 Over in Brodick, visit the Taste of Arran company because they bring together producers of the best Scottish food and drink. Think delectable Scottish cheeses, cold meats, and condiments. All producers take pride in their products, and the results prove themselves in high-quality ingredients and tastes. Buy some as souvenirs from Scotland, and family and friends will be equally delighted.

On Arran’ss east side, in Lamlash Bay, the Holy Isle receives much attention. Holy Isle focuses on world peach and health. However, anyone spiritual would do well to visit the Isle since they run courses in yoga, Buddhism, meditation, and mindfulness. Alternatively, visit Saint Molaise Cave, that in the 6th century was a refuge for a Christian priest. To get to the Isle, catch the ten-minute ferry from Lamlash pier. While in Lamlash, if you have kids, they might want to see the Marina Discovery centre, highlighting the area’s wildlife.

For those who think the Coast way route is too challenging for them, look at the Glen rosa route instead. The 5-mile trek of Scotland, through mountain ranges, covers the Goat Fell attraction. After the walk, drop by the Blue Pool and waterfall. The plunge pool is chilly but instantly noted for its vibrant blue colours. The Glen Rosa isle route has well-maintained paths and walking signs.

From Whiting Bay, the route leads up to Glensdale Falls. From there to Giants Graves Site, expect fantastic views across Holy Isle. The clue to Giant’s Graves attraction is the name, and urban legends say giants buried their victims here. Put that notion aside, though, because they date from the neolithic periods. Overall, most people complete morning walks there.

First opening its door in 1976, the Isle of Arran Heritage Museum portrays historical value for archaeology and geology of the Isle of Arran. Displaying artefacts from the Bronze age in Scotland, the museum does an excellent job of portraying Arran Island life throughout the centuries.

Arran Cheese Company sells many flavours of cheese. Some of which you have never heard of, and others you will want to take home as souvenirs from Scotland. Sitting aside Brodick, chocolate and mustards are other items they sell, and food lovers glimpse how they make their own delectable cheese flavours.

Given the fantastic coastline scenery and various coastline mammals and wildlife, kayaking tours are another favoured thing to do in Arran. Local operators take you out for lessons and set tour routes with professional kayakers and paddleboarders. They head to various locations, so keen fans kayak as much as they want.

As with other attractions, King’s Cave has its own story as a hideout centre for Robert the Bruce, when he spotted the famous spider. Also used as an 18th-century church, the cave sits on the Blackwater foot route, and visitors hear the ocean waves on rough days. The walk goes through steep sections, so you need to be agile.

While Brodick castle sits on the east of the island, over in the North stands Lochranza castle. Some may be disappointed after seeing Brodick castle since it pales in size and artefacts, yet if you are in the North, do take a detour. The MacSweens owned Lochranza, but the Kings of Scots also used it as a hunting lodge, and Robert the Bruce visited. Some say the Stewarts of Menteith, who owned the castle in 1315, may have built the structure. If you are lucky, you may also see one of the fantastic stags while visiting Lochranza castle.

Should I Buy a Holiday Home? People often ask whether it is worth buying a UK holiday home. COVID travel bans affected how we view our summer holidays, but with global economies suffering, more people are looking to their shores. So naturally, they want memorable summer holidays but also to invest in time-honoured real estate, the only sound investment in global financial storms.

Where to Go During Winter in the UK: We hope we have given much information about things to do on the Isle of Arran. Winter in the United Kingdom is an exciting experience, despite the weather, if you know the best places to go. Whether looking at indoor or outdoor attractions, towns, cities, and villages do their fair share of attracting winter tourists, thanks to magical landscapes, festive spirits, and typical winter wonderland vibes. This article shares some more UK travel destinations.

Properties For Sale in Isle of Arran

Investment Flats In Isle Of Arran

Apartments In Isle Of Arran, Scotland