Home > News > After Effects of the Recent Heatwave in Turkey

After Effects of the Recent Heatwave in Turkey

A recent heatwave in Turkey has received mixed reactions from locals and promoted a series of events previously unknown. On June the 30th, Meteorology Departments, through the country’s official press agency, warned of record temperatures and humidity levels coming in from the North African area, that would impact Greece, Bulgaria and Turkey.

The three-day heatwave is now predicted to subside allowing temperatures to return to normal which will please thousands of citizens, although some were not fazed and even experienced record business levels as people flocked to cool down.

Mixed Reactions to the Heatwave

Finding much relief and cold air in the underground cities, foreign tourists in the Cappadocia region of Turkey loved exploring the unique lunar and rocky landscape, yet remarked that they would only return in spring.

While much to his delight, an ice factory owner in the province of Adana reported sales tripled during the recent heatwave, even though, life in the city slowed down as locals headed to higher plateau grounds, where temperatures usually drop because of altitude levels.

Temperatures were an average of 12 degrees greater than normal, and locals in the popular holiday district of antalya“>Antalya said the heat was unbearable, and they preferred to stay indoors. Likewise, many were leaving bowls of water out for street dogs and cats, and birds were reported to have fainted in the capital city of Ankara.

While officials warned the young, old, sick or pregnant to stay indoors until after sunset, water parks, public pools and beaches were crammed to the maximum as locals flocked waterside. One waterpark in Izmir recorded a staggering 6,000 people visiting over a two-day period. In the eastern province of Tunceli, Turkish expats living in Germany endured the high heat by flocking to the local rivers.

In istanbul“>Istanbul, that receives higher humidity levels than normal, temperatures hit a 106-year all-time high, and locals took to the shores of the Bosphorus to cool down. While in Altinkum, a resort especially popular with British property buyers, one expat remarked that the weather was gorgeous. “This is exactly why I left the UK and came to Turkey.”

Sitting poolside, he added “However, I can understand why people who have to go to work, would feel uncomfortable. I also hope that many holidaymakers with children are making sure they are adequately covered and use sun cream protection.”

Unfortunately, the record heatwave has left much damage after an unprecedented number of wildfires were reported. Firefighters controlled a blaze in the Dikli district of Izmir quite quickly, but struggled with a 3-day forest fire that has engulfed 800 hectares on the western coast of Turkey.

Believing the fire to be a result of carelessness, the Forestry Directorate urged everyone to take precautions during the time to prevent further damage. Forest fires have also been reported in Canakkale and Kas on the Mediterranean coast of Turkey.

Stay up to date with the tourism, weather, property and economy updates from Turkey by following Spot Blue on Facebook. 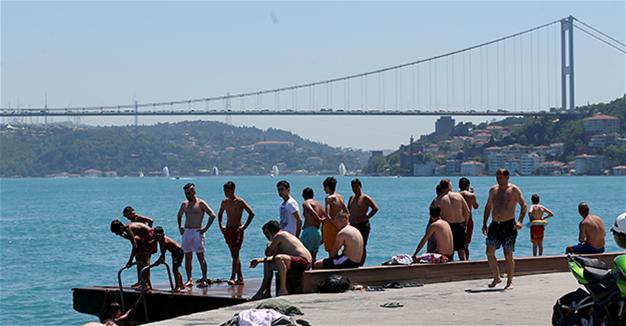