The Best Skiing Resorts in Turkey

In recent years, the profile of skiing resorts in Turkey rose internationally, revealing that even though winter is outside of the traditional touristic season, Turkey opens for business all year round. Additionally, many foreign house owners in Turkey do not just use their holiday home from Spring to Summer to Autumn, but now visit during winter. If you want to own a holiday home in Turkey and be close to a ski resort, expect a good choice. Although Turkish resorts can’t match the French Alps calibre, there is much future potential. Let’s look at this winter sport in Turkey, which major destinations they are near, and what to expect.

Eight of the Best Skiing Resorts in Turkey

For roughly five years, Bursa has attracted middle eastern property buyers to Turkey, eager to tap into various lifestyle choices. As well as the centre, Bursa is 36 kilometres from Uludag mountain, said to be in mythology from where the gods watched the Trojan wars. As one of the oldest resorts in Turkey, the skiing area sits at altitudes between 1800 to 2500 meters and receives a decent snowfall coverage from late December to Early April. 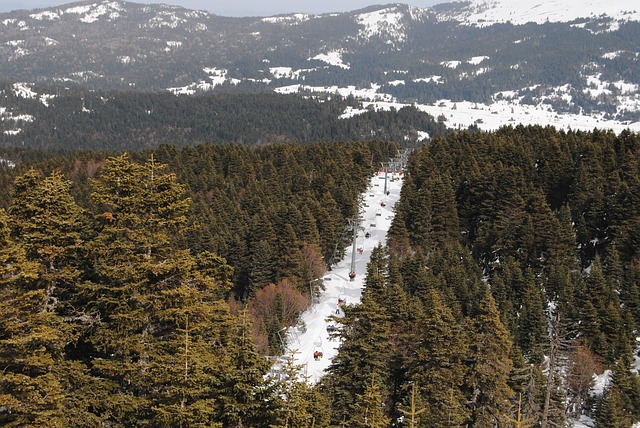 Uludag is also a favoured destination during winter for locals from Istanbul, who make the short journey for an overnight stay. Visit during New Year’s Eve to enjoy the mother of all parties, otherwise enjoy 24 lifts accessing 28 kilometres of snow. Other options include ice skating and snow biking. (More about the Bursa region of Turkey.)

Meanwhile, Mount Erciyes is a favourite for young crowds heading to central Anatolia, Turkey. As another one of Turkey’s oldest resorts, the 3915-meter altitude makes this a perfect ski resort with much potential. Twenty lifts give access to 102 kilometres of slopes ranging from beginners to experienced.

Visitors can book accommodation on Mount Erciyes, but many people stay in  nearby Kayseri city. Altogether 34 runs include 34% aimed at blue, 52% at red and 14% at black, making this a good choice for beginners and intermediates. Lifts open from 9 a.m. to 4 p.m., and rental shops also stock standard equipment for first-timers who want to try their hand at skiing.

3: Skiing and Snowboarding at Palandoken in Erzurum

As one of Turkey’s largest ski resorts, Palandoken in Erzurum commands a reputation of excellence among skiers. All services and hotels run professionally, with top quality in mind always. This is not any Micky mouse set-up. Most visitors choose hotels in Erzurum city just 7 kilometres away.

First opening in 2011, Palandoken also earned a reputation for stellar snowboarding facilities for winter university sports. Ranging in altitude from 2200 meters to 3176 meters, a gondola lift and five chairs service 22 pistes spread over 1100 acres. Visit from early November to late April, and while there, keep an eye out for the Kapikaya, and Ejder Olympic sized runs that attract skiers eager to try slalom skiing in Turkey.

4: Sarikamis near Kars in Eastern Turkey

Sitting 50 kilometres from Kars city in eastern Turkey, Sarikamis’s skiing season runs from late December to late March, and visitors enjoy an average snowfall of 1.5 meters. Many say the crystal-like snowfall resembles that seen in the French alps, rather than Colorado type powder. Standing at an altitude of 2100 meters, a few basic hotels at the resort are open for business, but many people stay in Kars city and make a day trip instead.

As another resort attracting snowboarders, Sarikamis also does well with those who favour alpine, Nordic and tour skiing. Altogether nine runs total 12 kilometres, with the longest being 3500 meters. There is also a 45-kilometre cross country route. 2 chairlifts, and one ski lift service the resort. While there, also make a detour to visit Lake Cilder for a horse drive carriage ride over the frozen lake.

As another resort opening from late December to early March, Istanbul locals love Kartalkaya for a weekend getaway, especially since snowfall can be up to 3 metres high. In the Bolu province’s pine forest, Kartalkaya includes 20 kilometres of snowboarding and skiing pistes at 2250 metres altitude, serviced by 18 ski lifts. There is a varied choice of hotels to stay overnight, or Bolu city is 54 kilometres away. One tip to avoid crowds is to visit from Monday to Friday when all locals have gone home.

Sitting within the national park of the same name and at an altitude of 2850 meters, Ilgaz ski resort often receives a blanket of fog and is surrounded by many pine trees with perfect skiing conditions for newbies and experienced. Beginners particularly like it because of gradual pistes, which are a gentle introduction.

This one does not attract as much attention on the list of ski resorts because the range of services is not as extensive. However, skiers enjoy two tracks totalling 2.8 kilometres serviced by one chairlift, ski lift, and walkway. For ideal snowfall conditions, visit between late December to late March. If flying to Turkey to ski, the nearest airport is Kastamonu, 40 kilometres away.

Saklikent ski resort consists of 500 chalets and ski facilities built on the Bakirlidagi, the northern slope of the Taurus Mountains range in the Antalya region of Mediterranean Turkey. Offering 120 days of quality skiing between late December to early April, Saklikent ski resort stands out with the slogan “Ski in the daytime, sea in the afternoon” because skiers descend the mountain and swim in the Mediterranean; thanks to warm winter temperatures at lower altitudes. 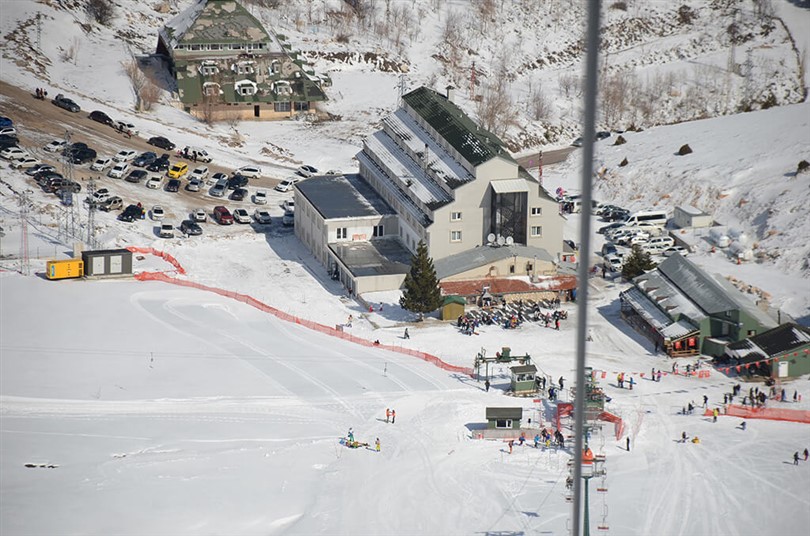 Although the average snowfall is between 1 to 2 meters, the summit has on occasion received four metres. The Karakaya chair lift transports 800 skiers per hour to the top of the mountain. Also, catch this one to see the views from the summit. Meanwhile, the T-bar transports 200 people per hour, and Babylift taking beginners to the learning slopes accommodates 100 people an hour. Learn about the Antalya Region.

With views of Turkey’s Lake Sapanca and a lush green forest, the Kartepe ski centre at 1650 metres altitude is another favourite for Istanbul locals. Sitting in the Kocaeli plateau of the Samanli mountains, skiers enjoy 2 meters of snow during a good season. With tracks ranging from 400 metres to 3500 metres, the resort suits every level of skier from beginner to experienced.

Altogether 12 pistes from blue to black, serviced by three ski lifts and one chair offer a perfect skiing playground. For ideal conditions, visit from late December to early March. For accommodation, stay in Izmit centre 15 kilometres away, or book the one five-star hotel at the ski resort with an indoor pool. Such is the close location to Istanbul, though, many locals from the city visit just for the day. Find out more about Izmir Center.

Cities in Turkey: When looking at the long list of cities in Turkey, foreigners soon realise there are many metropolises to visit and live in. As the world’s 37th largest country, Turkey comprises 81 official cities and annually, more join the list as towns boost their population and Turks flock in to find work and live. However, some cities in Turkey remain off the grid for foreign tourism and expat circles, while others stand out as the best and most popular. This article looks at ideal cities to visit and live in.

About Us: We are Spot Blue international real estate agents, and we offer a first-class service to our valued clients whether they are purchasing property in Turkey. If you found this article about skiing resorts in Turkey interesting, read the rest of our blog that talks more about the country, or follow us on Facebook to stay updated with international news.