Get ready to be surprised when learning about famous buildings in Dubai. The city used to be a small fishing village, but when they discovered oil in the 1960s, Dubai embarked on a massive project to turn into a global metropolis. As a result, they constructed buildings with unique architecture and style found nowhere else. The bonus, as if to display their newfound wealth, is that some buildings push architecture boundaries by going as tall as possible.

Marking Dubai’s skyline, they reflect innovation and skill, and the city is home to six of the world’s tallest skyscrapers. Alongside tourists come foreign real estate investors eager to tap into the prestigious status Dubai offers. So, let us look at iconic buildings.

Like a towering god, Burj Khalifa in downtown Dubai reaches over 2,500 feet making the 160-storey building the world’s tallest structure. The inspiration that features Islamic style was to highlight Dubai to the world. Residents of luxury apartments enjoy saunas, swimming pools, gyms, and other exclusive residency facilities.

The lengthy elevator journey to the observation deck also gives the stunning landscape and Persian Gulf views. Two quirky facts are that the building takes in natural air and then circulates through the rest of the building, and New Year’s Eve includes fantastic firework displays. Designed by Skidmore, Owings & Merrill and costing 1.5 billion USD to build, Burj Khalifa in Dubai took 22 million construction hours.

The 45-year-old Jumeriah Mosque features Fatimid architecture from medieval Islamic Egypt, so white stone walls become dramatic at sunset and when placed against the backdrop of stunning blue skies in Dubai. Accommodating 1200 worshippers, two minarets set off a striking dome, and to encourage everyone to learn about Islam; they also welcome non-believers. Appearing on the 500 dirhams note, Sheikh Rashid bin Saeed Al Maktoum, a former Arab Emirates ruler, gifted the world-famous building in Dubai.

This 321-metre tower began construction in 1994 when 2000 workers in Dubai created a gem that reflects a sail. Sitting 280 metres offshore, visitors reach Burj Al Arab via a mainland bridge. The project team employed global designers to complete interior décor and design themes, and clients can even enjoy the royal suite for library and cinema entertainment. 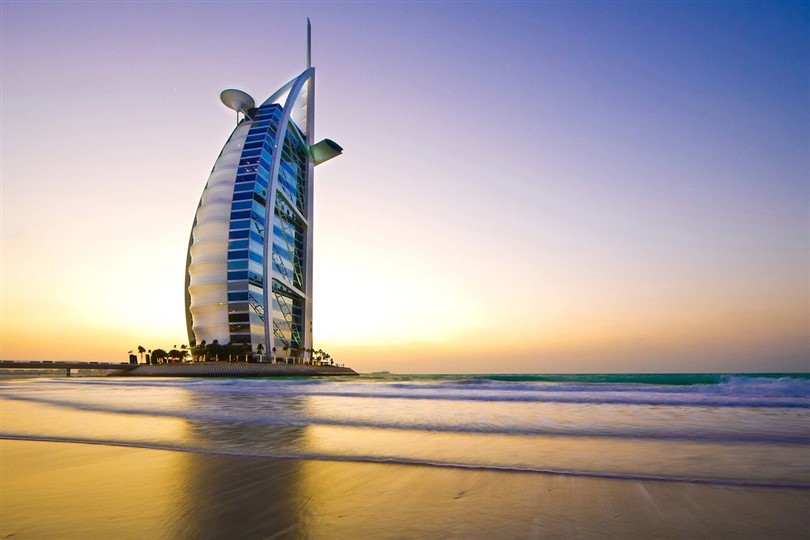 Other big facilities include an atrium, dancing fountain, 24-carat gold décors, a 21,000 Swarovski crystal chandelier, and a grand hotel lobby. Officially 14 metres higher than the Eiffel tower, this seven-star hotel attracts rich and famous people. But unfortunately, hotel management are very cagy about who they let through the doors given its seven-star status. For exciting exterior photos of this development, visit Kite or Jumeirah Beach. Fun facts, Burj Al Arab, sell the world’s most expensive cocktail, and wealthy visitors arrive via helicopter to the roof’s helipad.

Instantly, standing out with a twist shaped architectural appearance, the nine-year-old Cayan tower stands at 307 metres tall and covers 75 floors. The twist shape comes about because each floor sits 1.2 degrees away from the one underneath. As a result, architecture styles deflect direct sunlight and protect the building from strong winds. Sitting in the Dubai marina, residents of Cayan Tower enjoy various facilities, and a luxury Dubai lifestyle including 24-hour concierge service. Also called the Twisting or Infinity Towers, sustainable energy inspired the architects. Taking 84 months to construct, the architecture team also designed the famous Burj Khalifa.

The Atlantis style architecture with a few underwater rooms combines with Islamic influences to present one of Dubai’s most luxurious holiday destinations. With 1500 rooms, Atlantis Palm includes a 65,000 animal species aquarium, celebrity-owned dining establishments, and a waterpark. Located within the artificial palm island, roughly 10,000 people live within the project that took a staggering 1. 5 billion USD to complete. Décor and design include high painted murals, 19-metre-high ceilings, and the famous 10-metre-high sculpture.

Costing 330 million to construct and first opening in 2016, the Dubai Opera House mixes modern and traditional influences to present a unique building deserving of admiration. Designed by Atkins architectural firm, the 2000 seat building has two more purposes, including a concert hall and exhibition space. Famous performances held here include the Czech National Symphony Orchestra, Harry Potter and the Sorcerer’s Stone, Othello, and Phantom of the Opera. Built-in a dhow shape to reflect Dubai’s maritime past, visitors enjoy the sky garden and rooftop dining establishment.

Construction first started in 1996, and Jumeirah Emirates Towers opened four years later. The twin tower skyscraper on Sheikh Zayed Road features traditional Islamic and modern architecture with varying hotel and office use. One tower with 400 luxury hotel suites sits at 306 metres. In contrast, the other 355 metres tower has 54 floors of offices. Both connect via a central podium called the Boulevard. Architect Hazel Wong designed the buildings, marking their status as the first created by a woman. The architecture includes equilateral triangular shapes, silver aluminium panels and silver reflective glass.

Depicting a sea wave, Jumeriah beach hotel first opened in 1997, boasting a height of 341 feet, length of 275 metres, and covering 26 storeys. Blue plated glass emphasises the wave, and the same architectural team behind Dubai Opera House are the architects. 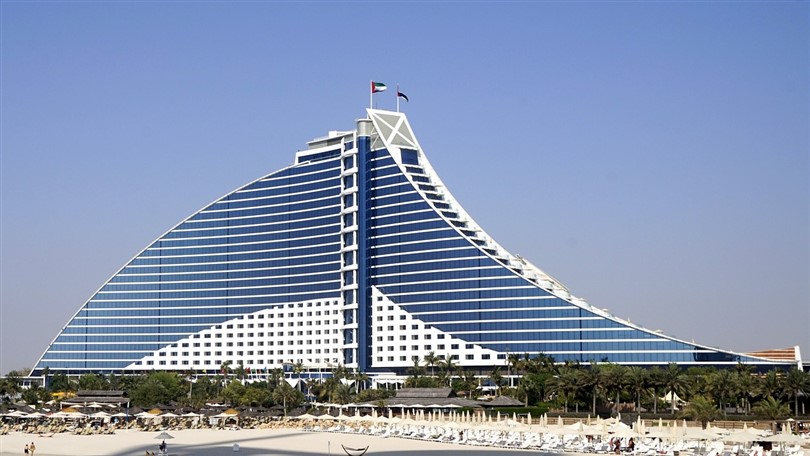 Residents luckily enjoy 33,000 metres of golden sand. After undergoing a refit and refurb in 2018, the hotel closed for five months; and the nature theme was enhanced. With five swimming pools, 10 bars and restaurants alongside a waterpark, this hotel building in Dubai deserves admiration.

These twin towers standing at 355 meters, opened in 2013 and features 1600 hotel rooms, bars, and restaurants, all accessed by 14 elevators. Designed by Archgroup Consultants, they said their inspiration behind the Marriott Marquis design was the Arabic symbol of date palms. Once called the world’s tallest hotel, for the ideal view across Business Bay, head to the 68th-floor restaurant. Also, enjoy the swimming pool and shopping facilities. 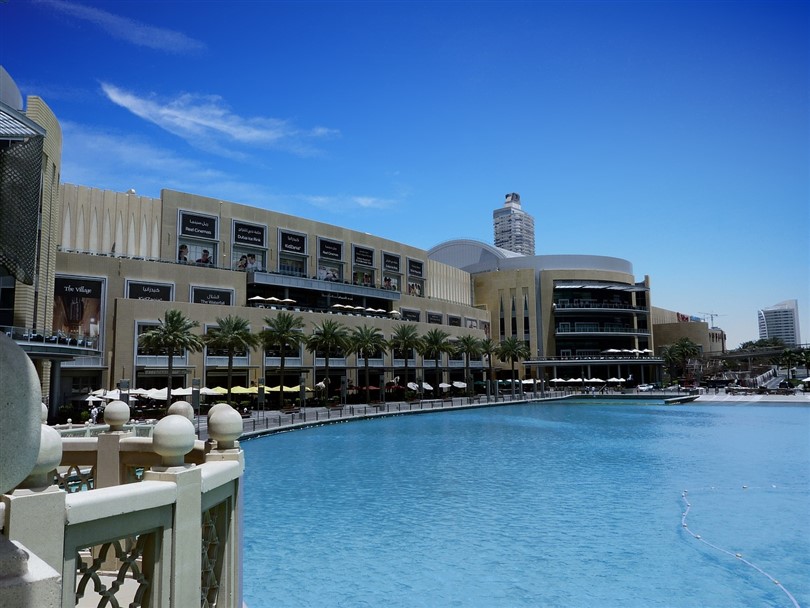 As Dubai’s largest mall, spread across 5.9 million square feet, the project was the brainchild of Emaar properties. Set aside a day to truly soak up the atmosphere because this isn’t your average mall, and as Dubai’s popularity grows, the 80 million annual visitors will increase.

Consisting of concrete, aluminium, glass and steel, this iconic 150-metre building opened in 2018. Offering views of new and old Dubai, the 48-storey building includes a sky deck telling the story of Dubai’s previous history. Sitting in Zabeel park, the tourist attraction does not get its name from just anywhere because it reflects a picture frame and resembles a glimpse into Dubai’s cultural heritage. Many local tours shops sell guided tours.

First opening in 2012, the 414 metre Princess tower and skyscraper used to be Dubai’s tallest building. Still, this reflects the growing trend by architects to reach for the sky. Taking six years to construct, the dome and decorative mast reflect a crown hence the name Princess. Covering 107 storeys, and despite losing its Guinness book of records status, Princess Tower is now Dubai’s third tallest building with penthouses suites, duplexes, and apartments for sale.

Wealthy Neighbourhoods in Dubai: Dubai city, a flamboyant emirates destination, rose from a small fishing town to a global talked-about destination. With magnificent skylines, Dubai’s real estate market attracts many foreign ex-pats, and, in some areas, they make up nearly 85% of local communities. Think spectacular penthouse apartments and stylish structures with swimming pools and landscaped gardens among natural settings and an excellent climate. Featuring famous buildings in Dubai, these neighbourhoods deserve admiration.