The Balearic Island of Ibiza is set to become even more of a hot spot for the global jet set, thanks to the construction of its new ‘Super Port’ combined with increasing numbers of upscale restaurants, designer shops and 5-star hotels.

The luxury real estate market has remained strong in all of the Balearic Islands, but no more so than in Ibiza, according to recent reports by a prominent international estate agency, who predicts a rise in buyers from the US, Asia and the Middle East over the next five years.

Prices in Ibiza have increased a reported 23.6 per cent over last year, with estate agents reporting double the number of sales there in 2015 compared with 2015, with an average transaction price of €1.2 million.

Due to the continued strength of the pound against the euro for much of late 2015, there was strong interest from British buyers, thanks also to increased confidence in Spain as a whole, together with the strengthening of the British economy.

According to agents, London is providing a constant stream of enquiries for upmarket property on Ibiza, mainly for second homes and lifestyle acquisitions. In 2015, 67 per cent of typical clients in Ibiza came from the UK, followed by the Netherlands, France, Italy and increasing numbers of the United States. Eighty-three per cent of buyers were looking for a holiday home.

Meanwhile, Spain’s Ministry of Development recently released data showing that sales of luxury homes in Ibiza currently represent 16 per cent of all total sales in Spain. Moreover, according to the Spanish property portal Idealista, in the capital, Ibiza Town, the average price per square metre had reached €3,594 by the end of 2015, compared with €2,909 in 2014, showing an annual growth of 23.6 per cent. 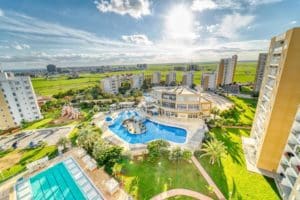 Studios For Sale In Tatlisu

Modern Villas For Sale In Iskele