Istanbul New Airport Gears Up for An Official Opening

As Istanbul New Airport gears up for its grand opening, all eyes are upon Turkey to see just what they have pulled off. Without a doubt, it is the country’s biggest and most expensive landmark ever built.

Spearheading Turkey’s list of mega projects, when complete in 2023, it will be an important travel hub not only in Turkey but also the world. Covering over 76.5 million square meters, it will replace Ataturk airport, Turkey’s busiest air travel hub, that in recent years has been struggling to cope with increased air traffic.

So who is running everything and what can we expect to happen in the following months?

IGA are the people in charge. Formed in 2013, with the sole intention of constructing and running the ultra-modern air travel hub, they secured the contract for 25 years, and are promising over 300 flights to destinations across the world. They also say their duty-free experience will wow everyone.

In 2015, Unifree won the duty-free contract bid. With an expected 50 million people passing through in the first year, this presents lucrative opportunities for the company, who say they will create 3000 jobs to ensure a top-notch shopping experience.

The retail space covers 53,000 square meters, the same size as Windsor Castle, the official residence of the British monarchy, and many items on sale include prestigious, luxury, fashion and beauty brands.

For now, 18 bus routes, 3 on the Asian side and 15 on the European side will ensure passengers get there on time. The car park can accommodate 40,000 vehicles, and 600 taxis will also stand by. IGA says in the future, there will be Metro connections and a high-speed train from and to Sabiha Gokcen airport. 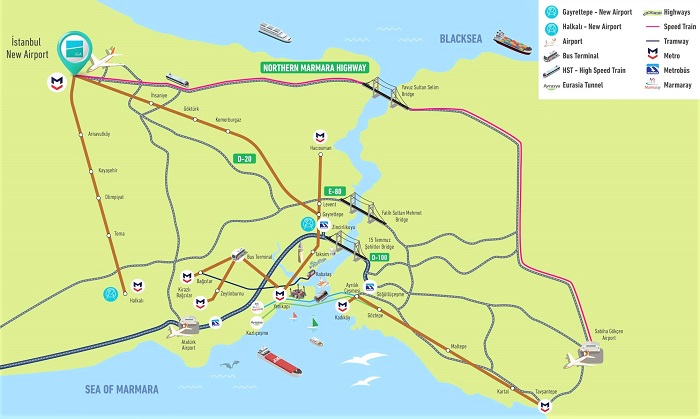 The first international flights will go to Northern Cyprus and Azerbaijan. At midnight on October the 1st, Istanbul Ataturk will close its doors to passengers.

Increasing Passenger Traffic at Turkey’s Airports: Stats from January to June 2018 showed Turkey’s major touristic airports were handling more air passengers than ever before, thanks to the country’s triumphant return as a top destination for global travellers.