In the current day and age, when most countries are actively taking part in minimising climate change, many people would question the construction of Istanbul’s New Third Airport and what impact it will have on the environment.

They would also be within their rights to question it because when complete, Istanbul New Third Airport will be the worlds centre of aviation. Labelled as the “greatest project in the history of the Turkish Republic,” the first phase will open in 2018, but construction will continue until 2028.

When complete, IGA, the company who won the contract to build and run it, says it will be an airport city, covering a staggering 76.5 million square metres. With a 200 million annual capacity of passengers flying to and from 350 destinations, and using the 24,000-space car park, the environmental impact is mind-boggling.

Yet IGA assures everyone that since day one, environmental protection has been at the forefront of their action plan.

Since 2014, a separate team has been heading up the environmental aspect of construction and running the airport. Using Turkish and international environmental legislation, they have named the following points as part of their environmental policy.

In 2016, IGA became the first Turkish company to be externally audited and receive the ISO 14001 Environmental Management System certificate for their planned construction and maintenance of the airport.

The ISO is an international organisation formed of non-governmental bodies that bring experts together to discuss and global challenges. One of their projects is a blueprint guideline on managing the environment.

The Istanbul New Third Airport also undertook the Environmental and Social Impact Assessment (ESIA) but are not stopping there. In late 2017, media reported that the airport also seeks an Envision sustainability verification that rates infrastructure projects not only for its environmental impact but also social and economic contributions.

With the airport promising to create more than 220,000 jobs by the time it opens entirely in 2028, the social communities surrounding it, will most certainly be positively affected. The airport also expects to pay a significant contribution towards the Turkish economy by generating billions of revenue every year.

Further details on the environmental policy of Istanbul New Third Airport can be found on their website here – https://www.igairport.com/en/istanbul-new-airport/environment-and-sustainability. 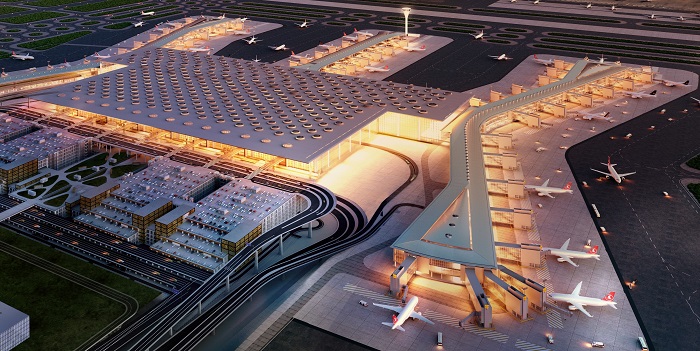