Home > News > January in Spain – Guide and Tips to Weather, Where to Go, Festivals and More

January in Spain – Guide and Tips to Weather, Where to Go, Festivals and More

Whether you plan to live there or visit, January in Spain can be exciting. January gets a bad reputation regarding travel, but there are many advantages over other more popular summer months. Additionally, ex-pats in Spain can learn about culture, food, and traditions in towns and villages when tourism dies down. This article explains why Spain is tremendous fun during January, day and night weather and temperatures, festivals, where to go, and other tips.

About January in Spain

Weather Guide in Spain during January

To find out January temperatures and hours of sunshine, do local research because Spain, Europe’s second-largest country, has several different geographical zones and weather climates. For example, Southern Spain experiences warmer temperatures than the north regardless of the month. Guaranteed, in most places, January temperatures are too cold to spend all day lying on the beach, yet ideal for exploring.

The Canary Islands are an exception. They experience more hours of sunshine during January. Otherwise, ditch shorts and bikinis in favour of trousers, and take a night-time jacket. In January, the Costa del Sol averages day temperatures between 7 and 18 degrees. Alternatively, Madrid ranges from 3 to 10 degrees. Also, pack a rain jacket because the Mediterranean coast receives an average of 1 inch of rain, while other destinations see up to six.

Benefits of Exploring Spain in January

Need to Know About Spain

High altitude Spain presents some excellent runs and resorts throughout January for skiing fans. Many people head to the southern coast, the Sierra Nevada Mountain range. In January, this centre of excellence offers 110 kilometres of runs for beginner to experienced snowboarders, skiers, and free-stylers. The Sierra Nevada also has a long ski season should you want to extend your stay. Otherwise, Zaragoza leads to Pyrenees Mountain ski resorts like Panticosa, Formigal and the biggest, Aramon, with 160 miles of runs in the Aragon area.

When not exploring during January, do indulge in some authentic Spanish cuisine. Everyone knows about Tapas, especially in destinations of Spain such as Barcelona. However, we prefer an authentic paella in Valencia, where this delicious dish was invented. San Sebastián delivers the pintxos cuisine, a version of Tapas. Otherwise, indulge in time-honoured classics like Jambon and Churros. 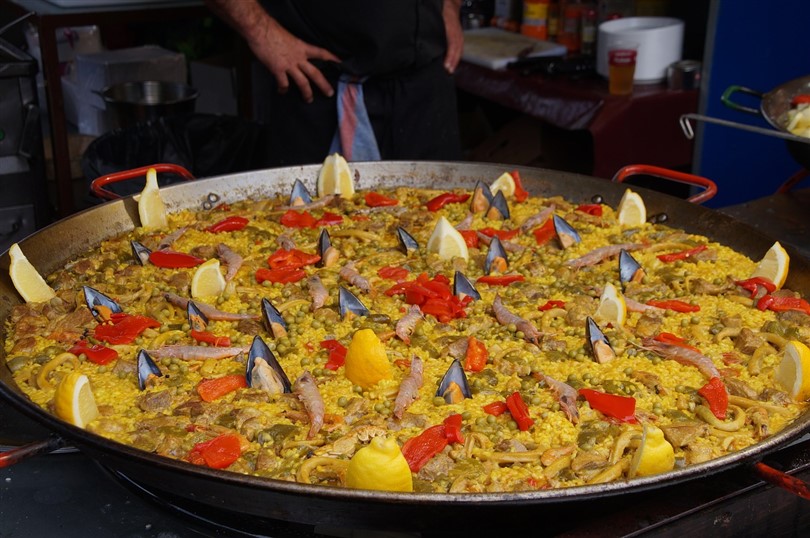 Southern Spain will just be finishing their January olive harvest. The spicy Escarole lettuce season runs from November to February so try it while you can. Iberian prize pork pigs are traditionally slaughtered from December to March, so stop by a butcher’s shop to pick some up for dinner. Scallops and octopuses are in abundance, and Atlantic coast towns specialise in Blackspot Seabream, a seasonal wild fish during January.

Where to Go in January

San Sebastián: Sitting in the Basque region of Spain, San Sebastián features world-renowned restaurants adored by food lovers. On January 20th, the area also hosts a traditional fiesta dedicated to the patron saint. This 19th-century festival stems from when Napoleon set the city on fire. Another bizarre tradition, to swim in the sea at Playa de La Concha, will undoubtedly evoke chills.

Canary Islands: Swinging around to the Atlantic Ocean, consider Lanzarote, La Plama, Tenerife, Fuerteventura, La Gomera, El Hirro, and Gran Caria. Their geographical position makes them perfect for year-round sunshine and a popular January getaway. In addition, each island offers something unique. For example, the Canary Islands host a music festival during January, which sees musicians from all over the world attending.

Costa del Sol: Also called ‘Coast of the Sun’ Costa del Sol comprises resorts such as Gibraltar, Marbella, Torremolinos, and Malaga. This picturesque Andalusian haven offers much, as evident in many foreigners who have already moved there. As of 2020, just over 140,000 ex-pats lived in Costa del Sol, scattered around various towns that cater for tourists. They chose this Costa of Spain for multiple reasons and traditional Andalusia vibes.

Córdoba: In Andalusian Spain, Cordoba holds many tourist attractions, including the Azahara ruins, Roman bridge, Mezquita mosque and cathedral and old Jewish quarter. However, during January’s last week, shop at the medieval market with more than 200 stalls, selling various goods. The event celebrates Cordoba’s medieval roots, which combines three different cultures that make it stand out among other January destinations in Spain.

Majorca: Also known as Mallorca, this Balearic Island boasts coves, limestone Mountains and Moorish and Roman remains. The capital, Palma, is home to the 13th century Santa Maria Cathedral. Additionally, on the 20th, a major festival is great fun. Palma lies on Mallorca’s south coast and is the largest city. The Balearic Islands most cosmopolitan capital, Palma, is a major Mediterranean tourist destination. Other cities and small towns of Majorca include Migjorn, Pla de Mallorca, Llevant and Raiguer.

Winter in Spain: Many clients ask us about the best places to live from December to March in Spain. As well as a holiday home, to enjoy hot summer temperatures, they want mild winters, devoid of snow, wind, and cold temperatures. This article looks at food, where to go, and things to do, so anyone choosing Spain during winter, experiences everything culturally Spanish and European.

About Us: We are Spot Blue, and we give a first-class service to valued clients who want to purchase land or property in Spain. Established in 2003, we are an award-winning company and often quoted by leading international newspapers and news channels in Europe. We took our local knowledge to form a blog about Spain that talks more about January in Spain, culinary delights, buying a home, weather, culture, and the best places.