Continuing its international fame as a luxury event destination, Antalya has hosted their first millionaire wedding of 2018. Anadolu Agency reports the marriage with a budget of nearly 1 million USD was of the son and daughter of two prominent and wealthy Indian businessmen.

With the exact location undisclosed, the only details given was that the three-day wedding took place at a luxury hotel in Belek, that is also the golfing capital of Turkey. Belek has a renowned reputation for five-star luxury hotels with personal services such as chef, concierge, nannies and chauffeured transport.

The couple were Kunal Khatri, who entered the wedding ceremony accompanied by three belly dancers and his bride Shena Tharwini, who joined on an elaborate throne. Guests dressed in traditional clothing also enjoyed a Turkish night as the main event. 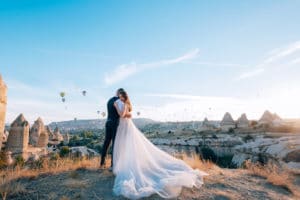 The event was organised by Inventum Global who are leaders in the field of luxury events in Turkey, having also arranged luxury birthday parties and wedding anniversaries in Bodrum. They gained international recognition for expertise after organising the 4-day millionaire wedding in 2015 of Sonali & Sumeet Aggarwal in the Marden Palace hotel of Antalya.

The 600-guest event included Indian’s tourism and economy ministers and was widely talked about because of the Marden Palace’s reputation as the most expensive hotel in Europe.

The success of Inventum Global in the luxury, Indian wedding sector is the result of challenging endeavours including workshops for more than 120 wedding and event organisers from India. In 2017, the company also paired with EEMA, that is the Events and Entertainment Management Association of India.

Turkish companies working with Inventum Global on the partnership included Turkish Airlines and Rixos, suggesting that Antalya’s first millionaire wedding in 2018 took place at the luxury Rixos hotel in Belek. The hotel chain is also home to the Land of Legends Theme Park that opened in 2016 and is Turkey’s largest covering more than 639,000 square metres.

Antalya in Mediterranean Turkey is the country’s 2nd most popular holiday destination as well as home to many expats of various nationalities. Known for its stretch of smaller coastal resorts, the diversity of shopping, attractions and nightlife, as well as ideal weather climate, make it a year-round destination.

Last year, Antalya hosted ten millionaire weddings and while this year’s number is not yet certain, Bunyat Ozpak who is a partner of Inventum Global, gave a slight hint as to what this year’s most talked about wedding in Antalya will be.

Speaking to Anadolu agency, he said one wedding will cost a staggering 15 million USD and have a worldwide impact. No further details were given.