When it comes to spotting famous faces in Bodrum, the peninsula’s long-established record of courting the rich and talented goes back decades. Stretching back to as far as the 1930s, artisans flocked upon the word of Cevat Sakir Kabaagacli otherwise known as the fisherman of Halicarnassus and the man who bore fruit to its fame. One could suppose it is the equivalent of Marbella. That Spanish resort has been courting celebrities since the 1950s, yet Bodrum goes one step further by throwing in unique cultural heritage and of course, time-honoured Turkish hospitality. 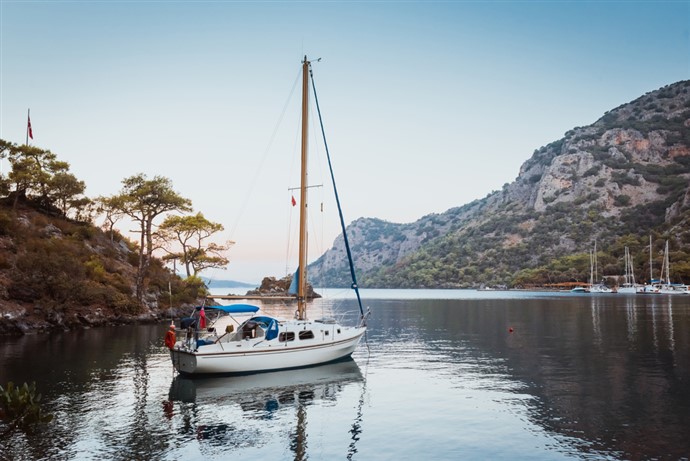 While other luxury resorts around the world promise high-level indulgence, Bodrum promises a touch of nostalgia as well. A sign at the entrance road says…

“If you come to the top of this hill, you will see Bodrum. Don’t think you will leave the same person as when you arrived. To all those who came before you, it happened that way: they lost their hearts in Bodrum.”

Such is its upmarket reputation; this year has seen more mega yachts arrive than ever before. At a time when the COVID crises severely impacted travel, Bodrum won the favour of mega yacht owners who docked for several days or weeks before heading to other Turkish Riviera sailing hotspots like Antalya or Fethiye. Indeed, whether arriving by mega yachts or private jet, many famous faces have enjoyed Bodrum’s delights over the years.

Kate Moss, one of the world’s most famous supermodels because of her pixie-like figure and alluring eyes, also happens to be a firm fan of working and partying too hard. Never fear, because every year, she visits the Life Co Resort, sometimes with a few of her supermodel pals. Here, she undergoes the most luxurious of detoxes to rejuvenate the mind, body, and soul. A strict diet, no alcohol, no coffee, and lots of cleansing routines helps her to maintain her youthful looks. She was also spotted in the high end beach clubs of Golturkbuku, a small resort known as the Saint Tropez of Turkey, and a favourite of many Turkish celebrities.

2017 saw the need for locals to make every effort to impress when Saudi Prince Talal bin Abdulaziz arrived at the airport with a huge entourage and 300 suitcases on a private jet. The 62-year Prince is another fan of Golturkbuku where he rented a private villa. Some villas in this area feature Turkey’s best architectural styles and the best of modern living, hence when up for sale on the property market often reach six digits and more. From there, it was time to explore the Turkish Riviera on a private mega-yacht hire. Bodrum’s excellence in luxury sailing and yacht construction world often keeps those who love the open waters coming back, and they include more than one Saudi Prince over the years.

When you are the world’s second-richest man, mega yacht travel is to be expected. To make fair use of it when in Turkey, the first place to head is Yalikavak, a once small sleepy fishing village transformed by the opening of a marina, that is one of a few with capacity for mega yachts to dock into. The marina hosts a variety of five-star gourmet restaurants including the best in seafood, fish and steaks as seen in Nusr Et steakhouse. 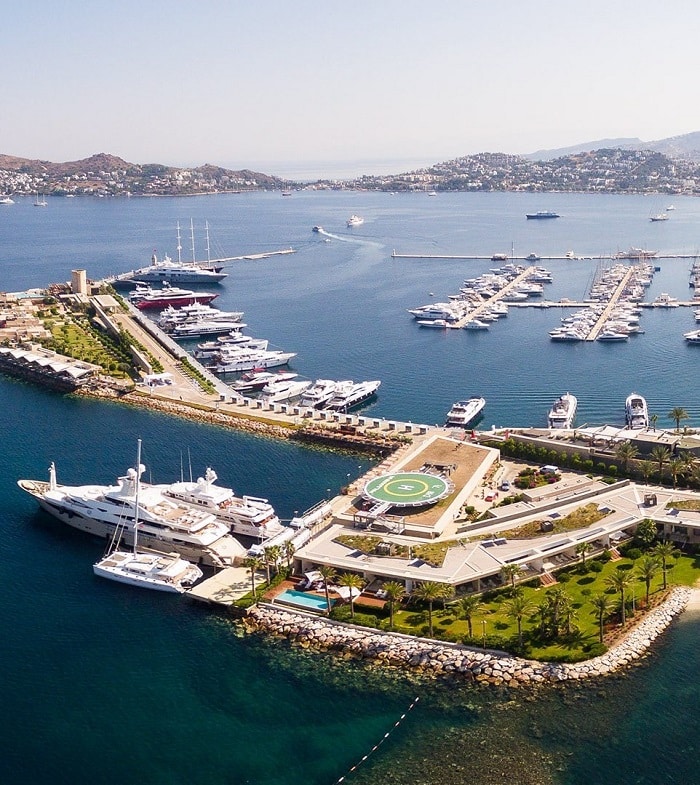 Surprisingly, Bill Gates never owned his yacht until 2020 but to cruise the peninsula’s coastline; he often hired luxury yachts like the Serene for a cool price tag of 5 million USD a week. This amount shows the professionalism of luxury personal, who repeatedly keep high profile visitors coming back with impeccable service.

4: Ronan Keating in the Barbaros Residences

In 2020, former Boyzone star Ronan Keating set tongues wagging of his Instagram followers by posting pictures of his luxury holiday. Rather than opting for private villa hire or a stay on a mega yacht, Ronan set his style by staying in the Barbaros Residences. Managed by the famous Kempinski brand, who own luxury hotels all over the world. This extremely private hotel sits in an idyllic location and is modelled on the renowned beach residence concept Bodrum is well known for.

Here, owners of apartments and villas get all the services of a hotel including concierge, restaurant, chef, gym, private beach and much more, and should they want to rent out their property, the hotel manages it for them. Ronan Keating and family also took the opportunity to hire a private gulet boat for the day, therefore encompassing the best of Bodrum’s cultural heritage.

In 2017, Nicole took on a new project as the official face of Turkish tourism, and this involved the opening of a brand new five-star residence called the Paramount. An apt name, given after the American studio of the same name, a three-night stay in a studio apartment will set you back at least 2000 Euros. Their pride residence, the Producer villa is something unique and offers the best in upscale living. Think indoor and outdoor pool, a Turkish bath, the most refined décor, and design, as well as your private butler to understand the scale of luxury they offer.

6: Tom Hanks on the Maltese Falcon

To prove the scale of Bodrum’s luxury vibes, we need only look at Tom Hank’s visit in 2017. Visiting with his wife Rita, they spent many days on the mega yacht Maltese Falcon. Named the finest superyacht ever by Superyacht World Magazine, it has gone on to win 17 more awards. Tom would have paid roughly 500,000 euros a week to rent this 88 metres yacht with outdoor cinema screen, on-deck jacuzzi, spa area and gym. The Maltese Flacon captures attention wherever she goes because her rigged sailing system is the best, and since locals love spotting mega yachts dropping anchor on the coastline, the falcon, would have been a welcome addition to the portfolio.

Where to Hang Out in Bodrum

So, if you have the cash to splash and fancy upgrading your social circle, which places should you look to. Ultimately, the king is Yalikavak. This small-town splits into the old and new part, of which the latter includes the famous marina with its upmarket restaurants and shops. When it opened, bringing in yachts from all around the world, this also impacted the real estate market; hence specific neighbourhoods are also known as the Turkish equivalent of Beverly hills. More about Yalikavak and why it stands out.

Aside from that, Golturkbuku maintains a much more discreet location. However, lounging beachside, partying in nightclubs and dining in top-notch restaurants can break the bank unless you are a millionaire. Many people are also surprised to learn celebrities, and wealthy businesspeople often prefer low-key Gumusluk for dining out, especially during summer. The esteemed reputation of seaside fish and seafood restaurants brings in gourmet diners from all over the peninsula. To find out more, read our guide to luxury Bodrum, that talks about shopping, nightclubs, dining out, hotels and more places to see famous faces in Bodrum. 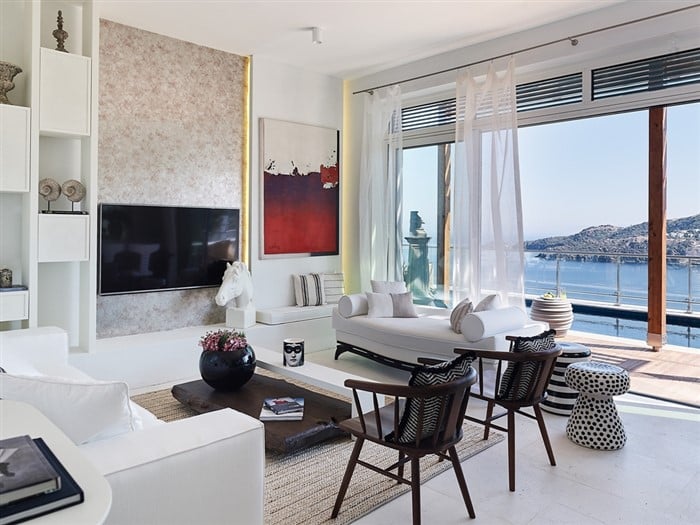 Luxury Real Estate in Bodrum: Anyone who buys luxury property in Bodrum is investing in much more than bricks and mortar. They are also tapping into an exclusive lifestyle found nowhere else in Turkey. From the distinct architectural styles like villas designed by the famous Richard Meier to tailored-made yachting trips, it is a world apart and your little utopia.

Towns of the Bodrum Peninsula: Covering a vast amount of land, this small corner of Turkey is a delight to explore. We look at which are the most popular towns, especially for people looking to move here, and discuss the reasons for their fame.